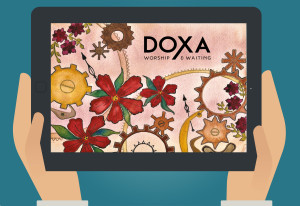 We were due to host our monthly DOXA evening of worship and waiting on God at St. Helen’s Church in Treeton on Wednesday. Since we can’t meet in person, we’ve decided to experiment with moving DOXA online to a Zoom meeting.

We’ll meet at the usual time of 7:30pm on Wednesdays, spend some time in worship, and then offer some space for people to share, pray and for the Spirit to minister to us.

We’re not 100% sure how some things will work, so it may be a bit rough around the edges. But our God is bigger than coronavirus and is bigger than social distancing, so we are confident he will meet with us powerfully in our homes as we gather together digitally.

We’ve found that a laptop with a webcam is the best way to use zoom, but there is also an app available for smartphones and tablets

Full details of upcoming meetings will be posted on our Facebook page.

We hope to see you there!

In response to Government advice the CofE have decided to suspend Public Worship with immediate effect. This means that from Sunday from this week we will not be holding services in our churches. Instead we are exploring resources to facilitate prayer and worship by individuals within their home. We will provide further information later this week.
In the meantime please continue to pray for all affected by the impact of the Covid19 virus and stay safe.

In the light of latest Government statements, ‘Thursday’s at St Andrew’s Church’ has suspended the Morning Coffee, Lunch and Afternoon service. We are really sad to have to do this, but feel this is the wisest and correct course of action. When we have any further information, we will let you know. Keep praying.

Coffee Pot at St Mary’s will be suspended until further notice due to the C of E directives on catering.

Due to the coronavirus I am sorry to say that we are cancelling First Steps until further notice.
We will keep you updated on when we hope to reopen.
Keep well and please pray.

Due to Coronavirus restrictions all our meetings are currently suspended.
We are currently holding regular online services on our Facebook page.

Can I also remind anyone who prepares a paragraph or two for the Annual Reports to let me have this by 5th March, either e-mail to linda.read@ sky.com or churchoffice@therivers-team.com.

Please pray for all those who serve us on these groups and try to attend your congregation meeting.

A Season Of Generosity

I don’t know about you, but I’m finding it hard to believe that we’re already into the third month of 2020! This year seems to be flying by and Easter is already just around the corner. In fact, the 40 day season of Lent – when Christians around the world spend time reflecting and preparing for Easter – is already underway.

Lent is a time when Christians have traditionally given something up as an act of sacrifice to honour the ultimate sacrifice that Jesus made for all of us when he submitted to death on the cross. However, over the last couple of years, in The Rivers Team we’ve instead been encouraged to take part in the 40 Acts Generosity Challenge.

Created by UK Christian charity, Stewardship, for the past ten years 40 Acts has challenged followers of Jesus with this question: what if Lent could be about more than just giving stuff up? What if it could be a time of radical generosity as well as spiritual discipline?

Taking part in 40 acts is a great opportunity to live out our Christian faith in a practical way that can have a positive impact on those around us. That’s not to say that you can’t still mark the season by sacrificially removing something from your life. But, if you’ve already committed to give something up during lent, why not replace it with a commitment to a daily act of generosity?

So how does it work?

It’s easy to take part in 40 Acts by signing up at www.40acts.org.uk. You’ll then receive an email each morning for the rest of Lent with a short bible reading and reflection, together with the daily generosity challenge. Each of these has an overall theme and then three different ways of acting on it, each requiring an increasing level of engagement. So you can decide how far you want to take each day’s challenge.

40 Acts can be done alone, but – for those who can – engaging with it as a couple or family is a great way to build a culture of generosity within your home. We’ll also be encouraging each other during 40 Acts as a church family, through The Rivers Team WhatsApp and Facebook groups, while our Sunday sermons throughout Lent will also tie into the same themes as the daily bible readings and reflections, drawing on the book of Proverbs.

So, as we go through the season of Lent, building towards the celebration of Easter, let’s be deliberate in our generosity. Let’s live out the gospel message of salvation found through faith in Jesus, one small daily act of kindness at a time!

Metanoia (The Process of Transformation)

Pastors more at risk than bandits

Spotlight on Mission – The Barnabas Fund

For Everything There is a Season