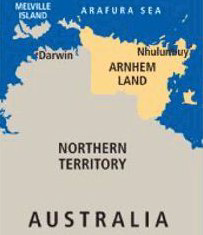 AUSTRALIA. Land of sun, sport and barbecues. But it’s also home to remote communities bearing more resemblance to their neighbours in Papua New Guinea than the western lifestyles seen in Australian soaps.

Inhabited by the Yolŋu Aboriginal people, ARNHEM LAND is a forgotten corner of this vast country’s Northern Territory. As close to Sydney as London is to Baghdad, the region has numerous ancient Aboriginal homelands which are each family group’s traditional land and are very important to people’s sense of identity and wellbeing. These areas are closed to the general public and require a permit to visit; measures put in place to combat the rise of violence, drugs, alcoholism and abuse through contact with western civilisation.

Barriers to sharing the Gospel are considerable, with many people illiterate and Bible translation incomplete. However, Peter Higham and his team are helping bring God’s love to Arnhem Land through modern means. Peter is Technology Services and Communications Officer for Mission Aviation Fellowship (MAF), and thanks to the need for flights in an area five times the size of Wales, MAF is one of very few mission organisations not subject to entry restrictions.

One project has been to expand and modernise a Good News cassette-and-booklet so it’s now available on DVD and mobile phones. CDs of Yolŋu worship songs have also been produced and are stocked with other print and non-print materials at MAF’s Christian bookshop at Gove Airport.

Nowhere is MAF’s innovative ability to proclaim the Gospel better demonstrated than through mobile phones. Many Yolŋu own one and the MAF team is literally tapping into the network, sending out Bible verses twice a week by SMS in English and the local Matha language. Last year, an ongoing vision to make videos with local believers to explain the Christmas story became a reality and the completed files were uploaded to Micro SD cards. Public screenings of these, and of the Jesus film, attracted young and old; homelands were given a free copy of the card and individuals purchased their own at a heavily subsidised price. Work is underway to produce a second edition.

“MAF is putting biblical truths in the Aboriginal people’s heart language on to their phones, which can easily be shared around”, comments Peter. Scripture’s truths are now being shared in the most contemporary of ways, and we pray for deep spiritual transformation. 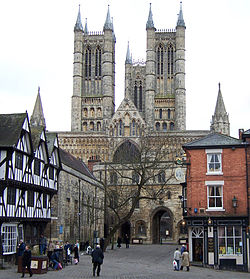 On Saturday the 14th June I joined the annual Rotherham Deanery Pilgrimage. This year was a first for everyone. It was the first time the pilgrimage had gone to Lincoln Cathedral and a first pilgrimage for me as a newcomer to the area. We set off at 8 45am. Unfortunately every time the driver changed gear the coach slowed down. He had to pull over, stop the engine and restart after a few minutes. This naturally concerned us and as time went on we were wondering if we were going to get there. Ron advised us all to pray and I’m sure everyone was silently praying in their seats. Eventually we arrived with 30 minutes to spare.

I have never visited Lincoln before, and my first impression was of a charming, picturesque city, and the cathedral was magnificent. And this compliment comes from a Liverpudlian who has two cathedrals to choose from! We entered through the main entrance, marvelling at the artistic crafts-manship of the stone masons who built this wonderful edifice.

We were led into a chapel at the far end of the cathedral where the communion service was presided over by Revd Paul Paignton. It was a moving service in a spectacular setting. Revd Lyn Wortley spoke about the Holy Spirit moving within us. One image was of water running down the hillside over rough rocks. Over time the continual flow smoothes the rocks.

At the end of the service we had free time. After a very necessary cup of tea and biscuit in the refectory we were raring to go. The group decided to explore the cathedral, searching for the Lincoln Imp and St Hugh’s relic. After extensively exploring the cathedral our stomachs were calling us away, so we walked through the pretty picturesque pedestrian area to eat. Afterwards we climbed back up to visit the castle where, although it is in the process of restoration and refurbishment, we still enjoyed exploring various areas and admiring the views from the walls.

It was a wonderful day both spiritually and socially. We all enjoyed the fellowship, the spiritual teaching, sharing communion in such an awesome place and the banter amongst friends. I thoroughly recommend everyone to go on this annual pilgrimage and I for one shall be there next year.

SEAN (pronounced SAY-ANN) is a method of Christian education for people without means, opportunity or education to study at Bible or theological college. From humble beginnings it has built partnerships all over the world, its courses now translated into over 70 languages. Its International Director, Terry Barratt, son of one of its missionary founders, recently revisited South America where it all began and was particularly struck by growth in Bolivia, where nearly 2000 are doing SEAN courses. Recently they were approached by a church of 5000 members, founded by a converted Paraguayan professional footballer (these things happen in South America!). He is now the senior pastor and has requested that his 30 assistant pastors do the Life of Christ course, before opening it up to the rest of the congregation.

In the highlands and isolated areas, SEAN’s partners have over 1000 students. One Saturday morning 20 pastors gathered to share their news, some travelling nine hours from remote areas. One testified: “Fifteen years ago, due to the lack of work in Bolivia I emigrated to Argentina. I suffered tough times there, which by the grace of God led me to meet Jesus in a church whose pastor represents SEAN in Argentina. So from day one I was discipled and trained to serve the Lord in ministry. By following God’s Word, my life improved and eventually I was able to return to Bolivia. I began to witness and started a church. Now we have a large congregation of all ages which I lead following that pastor’s wise counsel: ‘People need God’s word’. For this we use SEAN courses”.

Another pastor shared: “Several years ago we visited the local prison. A slow chain of conversions led to the establishment of a prison church and a SEAN Bible training ministry in the prison. After a time the impact of the new Christians’ witness, discipline and conduct became so noticeable that the authorities sent a judge to investigate. He made the extraordinary decision to shorten the sentences and set free ten Christian prisoners, stating that ‘What has happened here needs to be made public’. These freed men serve in different churches to this day.”

These accounts are a pattern repeated worldwide in places where motivated Christians and Theological Education work together. Over in Paraguay there are more than 2000 students. A significant advance has been made in their Tacumbu Prison ministry, where there are now 1600 prisoners in the Christian-run section of this 3500-inmates prison. 300 are studying SEAN courses.